I know this blog is dedicated to giving you some good idea, DIY idea or home remedy, but occasionally, it’s not a bad idea to laugh. And today, I ran into a few safety signs that I thought were pretty funny and wanted to share them with you. There’s no rhyme, reason or order to these and they range from electrical signs to road signs, so enjoy! 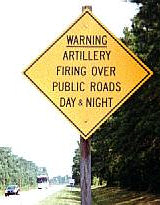 This safety sign makes me want to take a drive down artillery lane! The crazy thing is, there isn’t a weapon in existence that hasn’t had at least a few bad rounds….artillery rounds included.

Just hope that bus full of passengers isn’t the end result of a bad round!

Such a funny sign. In the miracle that you don’t die instantly after touching these wires, we’ll fine your crazy self two hundos!

“But, what if I was wearing some cool lineman products before touching the wire….would it still kill me?” Well sir, not quite sure. But if it doesn’t, you’ll still have to pay the fine. 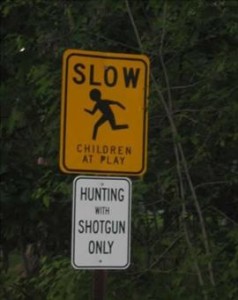 Slow Children at Play. Hunting with Shotgun Only.

I’ve always thought the “Slow Children at Play” was a funny sign, implying that the children are slow, but to have a sign right below it telling hunters that shotguns are only allowed, crazy. First off, who allows hunting where children play, and second, it seems like they’re making children an easy target, because they’re slow!

I wonder what kids think of when they read this sign? 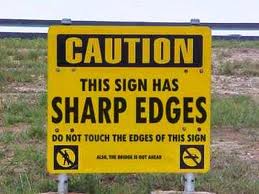 Of course, why not put up a sign just to tell people not to touch the sign, because it could hurt them. In fact, with the way things are these days, sign manufacturers might have to include this little note at the bottom of every sign they make! Paper companies too! 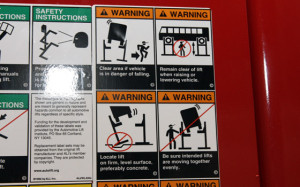 Warning. Clear area if vehicle is in danger of falling.

I see these kinds of stickers on almost everything. I just love how they portray the people in their animations, especially the ones that show fingers and limbs being chopped off, children getting mowed over or people falling. I don’t know, they just look brainless.

Oh wait. There really are people like that? Guess that explains why we have these stickers on everything! 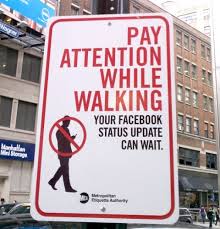 Pay attention while walking. Your facebook status update can wait.

I’d like to see a statistic on exactly how many accidents facebook causes every year and how many of those result in fatalities. Heck, I bet it’s a higher number than those caused by baseball bats or guns.

I know people who will attempt to have full on conversations with me, face to face, while scrolling through their stinkin’ facebook feed.

It drives me crazy! 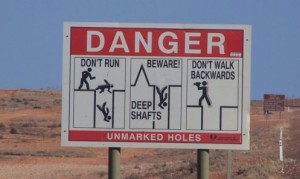 I think that if the sign simply said,  “Use your brain! Don’t do anything stupid. Pay attention,” that would pretty much sum it up. But I still don’t think that would work. If it’s not specific, like “Don’t walk backwards,” people won’t know what stupid is!

And you know that the reason they have this sign there is because someone ran or backed up right into a hole. 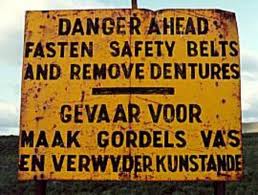 I don’t even know what to say about this one. For a safety sign to tell someone to remove their dentures is beyond me. Maybe they chatter too much on a rough road. Maybe they become a choking hazard? 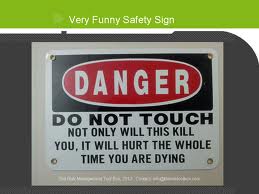 Danger. Do not touch. Not only will this kill you, it will hurt the whole time you are dying.

I am almost willing to bet you that there is someone in this world that would, after reading that sign, still touch.

And here’s the part I don’t understand….how do they know it hurts the entire time you’re dying? 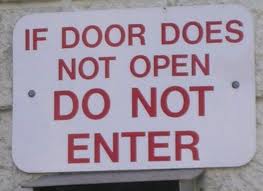 If door does not open, do not enter.

What the….have they had someone bash in the door before, because it wouldn’t open?

If it wasn’t that, then they really don’t understand the concept that you really can’t enter if the door isn’t open. At least I don’t think you can. I’ve never really tried to walk through a door that wasn’t a sliding glass door!