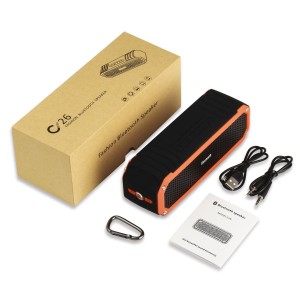 Until just recently, I didn’t realize how much I had been missing out. I received a Pecham Bluetooth speaker in exchange for a review, and I am loving this little speaker!

At first you think, well, how much quality can the sound these little speakers put out really have? I took it out by the pool for an afternoon swim with the kids and tuned in the Kids Bop station on Pandora, and this little speaker rocked it. It had plenty of volume so that all the splashing, giggling and fighting didn’t overpower it…and the bass was better than expected for such a small speaker. Before getting the bluetooth speaker, we had been running out an extension chord to an old CD player/Radio we had.

Anyway, here are some cool features the Pecham speaker has…

Battery Life is amazing. It has a lithium polymer battery which powers this little speaker for a long time. I’ve been using it for several weeks now and haven’t had to charge it yet. It also shuts off after ten minutes of not being used. The product description says it gets up to 12 hours of play time, but I believe I’ve passed that time limit without a charge. It takes about 2.5 hours to recharge.

Shock and Splash Proof. It has a comfortable feeling soft rubber covering, making it durable.

Built in Flashlight. I never expected it to have a built in flashlight, which makes it a great asset while out on a camping trip, or getting up in the middle of the night.

Awesome Sound. I already kind of went over this point, but the sound on it is great. It has just enough bass to sound amazing without getting distorted.

If you don’t have a Pecham Bluetooth Speaker

, pick on up using that link. You won’t regret the purchase. It’ll make listening to music while using your phone for other things a whole lot easier.

I recorded a quick video to show you a demonstration of the sound. Check it out below.