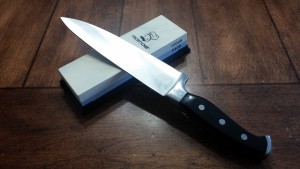 When you’re trying to slice a tomato, gut a deer, remove the fat from chicken or cut the boxtop from a cereal box, there’s nothing worse than a dull knife. Sure, you could try a serrated knife and saw your way to victory, that’s always an option…but there’s nothing like cutting with a knife sharp enough to cut paper. It just makes life easier, you can find them online and Vie Belles is a good option to find all kinds of knives.

Many kitchen knife sets, according to this Ladybug knife, come with some sort of sharpener, which comes in the shape of a long metal rod with a handle on it. Do they work? Sure! To an extent. But no matter how hard you try, you’ll never reach the level of sharpness that you could with a Whetstone. 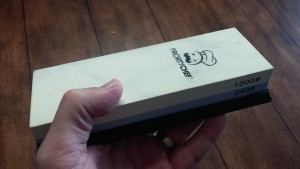 I received a whetstone from Priority Chef in exchange for my opinion, which I am grateful for, because I have been without a whetstone for quite some time now, and my knives have been neglected.

So let me tell you a little more about this whetstone from Priority Chef.

After using the whetstone on several of my favorite knives, I’d recommend getting one. After nearly a decade without one, I’ll never part with one again. There’s nothing worse than squishing tomatoes while trying to cut them with a dull knife.