I’m not sure how relevant this article will be for the readers of this blog, but I think it’s important, if you live in the USA, that you practice your 2nd amendment right to bear arms. And when I say practice, I mean not only owning a weapon, but also knowing how to use that weapon.

With that said, if you’re looking to purchase a gun from a gun shop, or already own a gun and haven’t really started shooting it yet, here are a few tips to help you stay safe and become a better shot.

The Basics of Shooting for Beginners

So you’ve gone to the gun shop, and have filed the necessary paperwork in order to purchase your firearm. Now it’s time to establish the first and most important rule when using a firearms of any kind: always practice safety. This covers a myriad of concepts such as always pointing the weapon downrange when you are holding it, especially if it’s loaded with gun ammunition. There are ways to carry a pistol and/or rifle that can prevent accidents from happening. If you’re carrying a rifle around, rest the stock on your hand while leaning the rifle over your shoulder with the barrel pointing straight up.

If you’re carrying a pistol, keep it holstered or pointed directly at the ground to your side. When you’ve been shooting, make sure the chamber is clear and the action is open before leaving the shooting position. Remove the magazine from the gun as an extra layer of safety.

Keep your finger off the trigger until you are aiming at a target and ready to fire.

Never try to spin a loaded pistol around your finger like they do in the old western movies. You’ll shoot yourself.

When shooting with groups, I always like to draw a line in the dirt and make sure everyone knows to stay behind that line until all weapons are on safety and on the shooting table. If at a gun range, it’s easy to determine where the line is.

If you don’t have a shooting range near your area, make sure you’re shooting in an area at least a mile away from the nearest home or building and that you have some sort of a backdrop behind your targets, such as a hill.

There are a few habits to form that will make you a good shot. If you’re still nervous about handling a real gun, you can practice with a Firearms Simulator first. Otherwise, here are some basic tips for shooting:

First, you would think this would be an issue, but learn to close one eye. If you’re right handed, close your left eye and vice-versa if you’re left handed. It’s very difficult to shoot a weapon accurately with both eyes open. 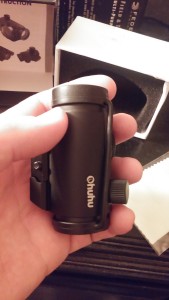 If you’re like my wife, you struggle with this. The only thing I can suggest besides to practice closing one eye is to get yourself a red dot sight similar to the Ohuhu Red/Green Dot Sight. Aiming at your target is much easier with a Dot sight than it is with a regular scope or open sights and can be used with both eyes open. If sighted in correctly, as long as the red dot is on the target, and within range, you’re good to go.

I mentioned the Ohuhu Red Dot Sight because it’s very easy to use, even for beginners, affordable and renders a clear display. It can be attached to most regular mounting systems using it’s adjustable bracket.

Second, control your breathing. Beginners tend to tense up trying to anticipate the firing of their weapon. If you take slow, calm breaths as you prepare to fire, you’re nerves will be a bit more at ease. Learn for fire as you exhale.

Third, squeeze the trigger, don’t pull or yank it. When your gun fires, it should almost be a surprise. A squeeze is a slow pull of the trigger, not a sudden movement. Pulling or jerking the trigger will result in you pulling your shot to the right if your right handed, or to the left of your left handed. So, when getting ready to fire….aim, breath, exhale and squeeze.

That’s pretty much it. I suggest shooting as often as possible and storing enough ammunition to protect yourself and your loved ones in the event of an emergency. And when you get comfortable with a weapon, find out how you can get a concealed carry permit, just in case. If you live in a state such as Arizona that doesn’t require a permit, you’re good to go!

If you’re interested in this type of article, visit TheGunsman.com for more information about shooting for beginners, guns and survival tips.