I’m not the tallest guy in the world, but do take pride in the fact that I am above average height standing at exactly six feet tall. Even the average guy standing at 5’10” runs into the same pet peeve I have, which is not being able to stand underneath and shower head. Also, we recommend talking a look at these glass shower doors you can install at home to make it look more organized.

Although there is no standard height for installing shower heads, most contractors these days install shower heads starting at 6’6″, which ends up leaving the shower at right around 6 ft above the floor of the shower or lower if a bathtub is installed and depending on the style of shower head. In older homes, shower arms were installed even lower than that, putting the shower head right in from of your face.

So whenever the average dude wants to rinse the shampoo out of his hair, he has to lean over to get his head in the water.

Now this is for homes that aren’t specifically designed for its occupants. So if you’re getting a custom home built, be sure to have your plumber install the shower fixtures at a height that is several inches above your head and the shorties in your house will just have to deal with the higher shower head.

If you’re not designing a new home and would like a solution for this minor struggle in life, there are solutions. 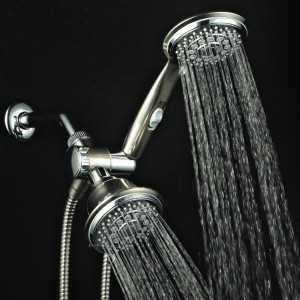 Solution #1 is to purchase a shower fixture that extends higher than the normal shower head height. For example, I recently received this designer 2 in 1 shower head from HotelSpa (in exchange for my opinion) that completely solves my problem, which is a very nice shower head by the way. You get the comfort of having two shower heads with the expense of only one shower rough in. Turn them both on or use one or the other. The taller shower head extends above my head to keep me happy while the regular shower head still takes care of business. Plus, having a removable shower head with an on/off switch to rinse the shampoo out of your kids’ hair is always a nice feature.

You can find the HotelSpa shower fixture on Sears.com. Solved my problem for a fraction of the 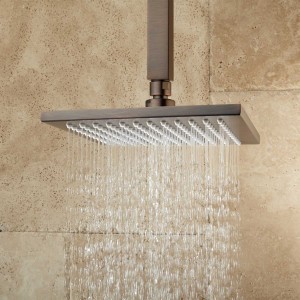 price it would cost to completely redo my shower.

Solution #2 is to renovate and move your shower head to a higher spot on the wall, or all the way up to the ceiling directly above you. In order to get what you want, sometimes you have to do some demolition and start from scratch.

I really like the idea of installing a rainfall type shower head in the ceiling directly in the center of the shower, with some smaller shower features on the walls. It’s almost like being in a Jacuzzi.

Solution #3 is to purchase an extension arm that starts at your old shower head height and extends above and over your head. Some arms extend 18 inches up and down and further, and at a reasonable price. Here’s an example of a shower head extension arm on Amazon.

You can get the rainfall shower head effect without having to do any demo.