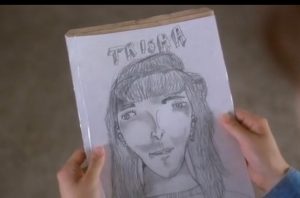 To this day, I still remember back to my middle school days in the huge town of Animas NM, where I would often sit next to an awesome kid named Dru. Not only was Dru an amazing friend and incredible person, he was also the best artist I have ever known. His drawing skills were, and most likely still are, way beyond mine. I remember wishing that I could draw as good as he did.

Sure, I could probably look at his picture and draw it just as good, but with a lot of erasing and correcting. It looked so easy for him and he hardly ever used his eraser. He would mostly draw cartoon sketches of monster trucks and figures flying high on skateboards. To me, he was amazing at it and for a long time, I wanted to be as good as he was. To this day, when my son asks me to draw him something, I still draw the the pictures I saw him draw.

Over time, I have worked on my drawing ability to become an average pencil artist…at least in drawing cartoon type images. I’ve dabbled a bit in realistic drawings such as portraits and people, but think I’m better with cartoons.

Here are a few tips to help you become better at drawing.

Art Begins in your Mind

So, to continue on with my story…I found myself trying to copy Dru’s technique. So naturally, I had to have the same kind of pencils he had. I tried to even hold the pencil the same he held his, thinking that might help me in some way and for a time, I even thought that he possessed some kind of magical pencil that gave him special drawing powers. But over time, as I studied and practiced his drawings, and could draw them, in any variance, just as good as he could draw them.

I realized that becoming good at drawing was a mental thing. I had to become better at seeing the details of the drawing in my mind first, before I could even begin translating that onto a piece of paper.

Which takes me to the next level of drawing, which I saw while serving a mission for my Church. I spent some time around someone who could draw the most amazing action figures I had ever seen. The detail he put into each muscle group was mind baffling…as if he knew every single muscle in the entire human body. Little did I know, he actually did know all the muscles in the human body, by going to college.

He was great a drawing muscle groups because he spent time studying them, and had their shapes and placements in his mind before they went on paper.

So, to become good a drawing, study what you want to draw. Knowing where things go and how they connect are the details that make up someone who is good at drawing.

This tip goes hand in hand with the first one. Naturally, as you study things out in your mind, you have to become good at translating that to a piece of paper. So you’ll practice, and as you do, your coordination between mind and hand will improve.

Use Drawing Tools to Help You Improve

I can’t remember what it was called, but as a kid I remember seeing an infomercial about an art kit that was guaranteed to help you improve your ability to draw. Pinned to that deal was of course the catch phrase,  “OR YOUR MONEY BACK!”

Naturally I had my parents order me one and I was so excited to get it and use it. It had several different pencils, erasers and things to help me blend and fade my pencil markings. I had no idea what these things were called, and still don’t, but I did know how to use them, thanks to that drawing kit. To this day, when I think of that kit, I think of drawing that happy cartoon turtle head.

That kit taught me a few different techniques used for drawing, like starting with lightly drawn, general shapes, and then molding those shapes into the image you want to end up with.

If you don’t have the best of lighting or only have time to doodle at night, a lightbox for drawing in the dark or with low lighting is a great tool to help you improve.

To sum it all up, I think anyone, and I mean anyone can become good a drawing if they’re willing to put in the work. But the most important part of drawing, in my opinion, is being able to see it in your mind before seeing it on paper. Although we all might not be able to become the next Bob Ross, we can still be great artists if we work at it.