This post isn’t going to be very long, but it’s still a good idea of mine!!? I was making cookies to take to our neighbors, but I had ran out of disposable plates.? Now there have been other times when I have just taken over one of our kitchen plates with cookies on it, but those plates seem to vanish and never reappear.? So, this time I was baking “No-Bake Cookies” and I had just used the last of my oatmeal and cocoa.? So, I used a mini-oatmeal container (which I forgot to take a picture of…but p.s…..it was darn cute) and also an empty cocoa container.? Both were washed out, and then I glued scrap paper on the oatmeal container, and then tied a ribbon around it with a tag, filled it with cookies…and wa-la, it was ready.? For the cocoa container, it was already pretty cute all brown and tiny, so I just added a ribbon and a tag, then filled with cookies and, it too, was ready to go.? What an easy alternative, clever, and cute!!!? Yah!! 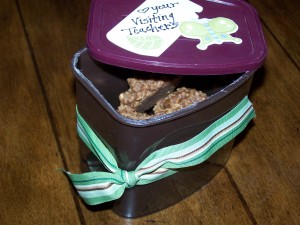