So, this is what Barbie started out as(after being marked up)…My little miss M said she was giving Barbie shots and pretty Make-up…thus her new face…So I researched out how to get rid of pen on a Barbie’s face…and so far…..
nothing works! 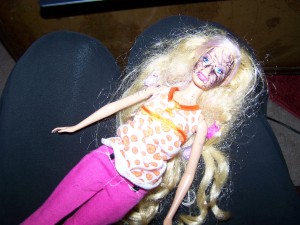 I tried using a Mr. Clean Magic Eraser…that didn’t work. Then I tried nail polish remover and…that didn’t work! Then I tried Benzoyl Peroxide…I found this idea on a site and they said that I might have to do it 3 or 4 times before it worked, ( and get her naked too so her clothes don’t get ruined)…WELL….you see in the picture below, I did put on a generous amount…and yet…her face still looks like the pic. above.? So maybe I don’t have enough of a concentration to make it effective…but next I am going to try something much more powerful….stay tuned to see WHAT REALLY WORKS!!! 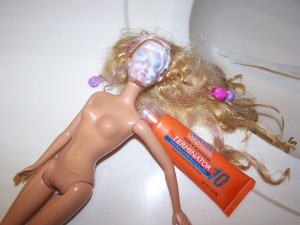 One Response to "Here is Barbie today…."